Last year when we went to Blackpool for Sand, Sea & Spray we had to work in the driving rain all day (but still managed to get a couple of pieces done) and despite the weatherman’s warnings that this year was going to be pretty similar we set off from London with hope in our hearts. This being the UK however our dreams were soon to be shattered. Despite waking to sunshine it soon became clear that was not going to be the order of the day and so after finding our billboard spot on the Winter Gardens we set to work in a steady drizzle. Soon this escalated to full blown torrential rain that stopped play for a while as we were forced to wait it out in a doorway. From there on in for the rest of the day it was a cycle of rain, a snatch of sunshine and then more rain. We had to get finished in a day however as we had a wedding to attend on Saturday otherwise a strategic retreat to the nearest hostelry would have been in order.

During the afternoon My Dog Sighs turned up and we all agreed that the addition of some of his eyes on our lady would definitely be a good thing so he added them on Saturday (in glorious sunshine i hasten to add) – and surely she looks good with her one real looking eye and one of our eyes? The title and text of ‘Taking the cure’ refers to the Victorian pastime of coming to Blackpool to bathe in the sea as it supposedly had healing qualities.

Once we’d finished and dried off a little we went to have a quick beer, see what the Q&A session was like and catch up with whoever was about. All in all a good day out and we’d just like to extend our thanks to the S,S&S team who were all very helpful and accommodating. 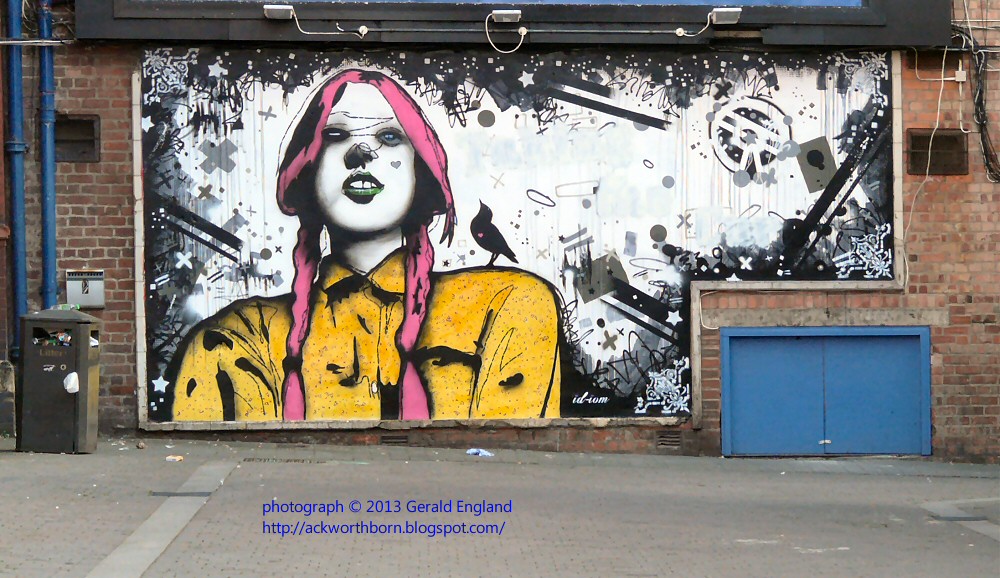 Sooooo, we’ve somehow managed to ruffle some feathers with this piece and it turns out the Man wasn’t very impressed with our choice of text. The text refers to the Victorian pastime of ‘taking the cure’ – being to bathe in the sea for healing/medicinal purposes, which Blackpool used to be famous for. It’s even mentioned on their Wikipedia entry but the Man doesn’t see it that way. Apparently we were making a drugs reference. After a short battle with the powers that be (we lost) and the text had to be removed (as per the picture above). Hopefully some more text will be added in due course. At least the main picture still survives though and the updated (and less contentious) text will get the Man’s approval this time…